After waiting for over a week for the inclement weather to clear up, we couldn’t be patient anymore and decided to take our chances. Our journey towards Imja Glacier (5010 masl) began at 6 am early in the morning from Kathmandu.

Crammed in a small jeep, we reached Salleri (the headquarter of Solu district) after 12 hours. Thankfully, the sky had cleared up after a week of incessant rain. After spending a night in Salleri, we kicked-off our journey towards Imja glacial lake at 06:30 am on 8th Sept, 2016. It was a tough walk on the path, mostly used for transporting goods on the backs of mules; the path was muddy due to the recent rainfall and it was difficult to find a good foothold. It took us 5 days to cross Nunthala, Jubhing, Kharikhola, Paiya and Surke – the entrance to Chaurikharka VDC – before we reached Namche Bazar (Namche VDC) to the North. 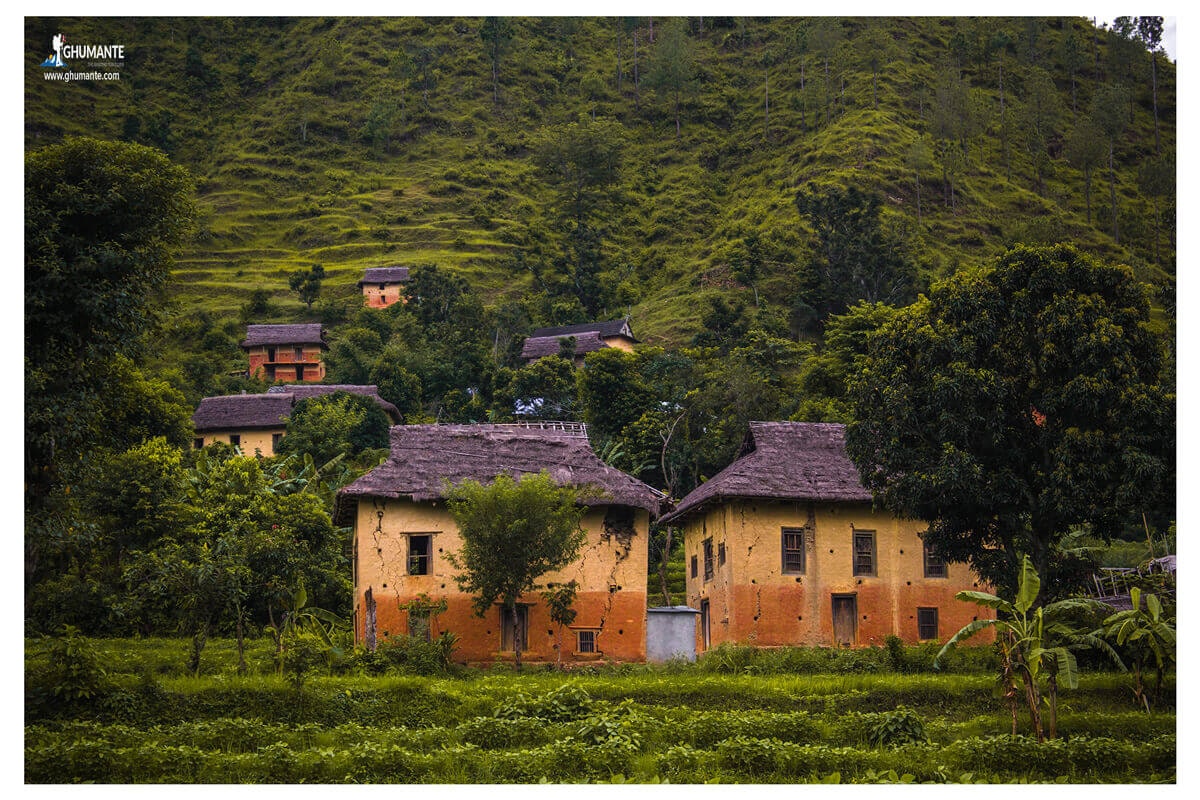 Traditional house on the way to Salleri

The trek was tough, however, the lush green pine forests, the sweet fragrance of pine, numerous waterfalls, the giggling of Dudhkoshi – made it worthwhile! We witnessed the catastrophic landslides in Surke, which had swept away 3 houses. The locals, though, quickly cleared the trail. We were also fortunate enough to have a close view of Pasang Lhamu Sherpa’s home at Surke – the first ever Nepali woman to climb Mount Everest in 1993. 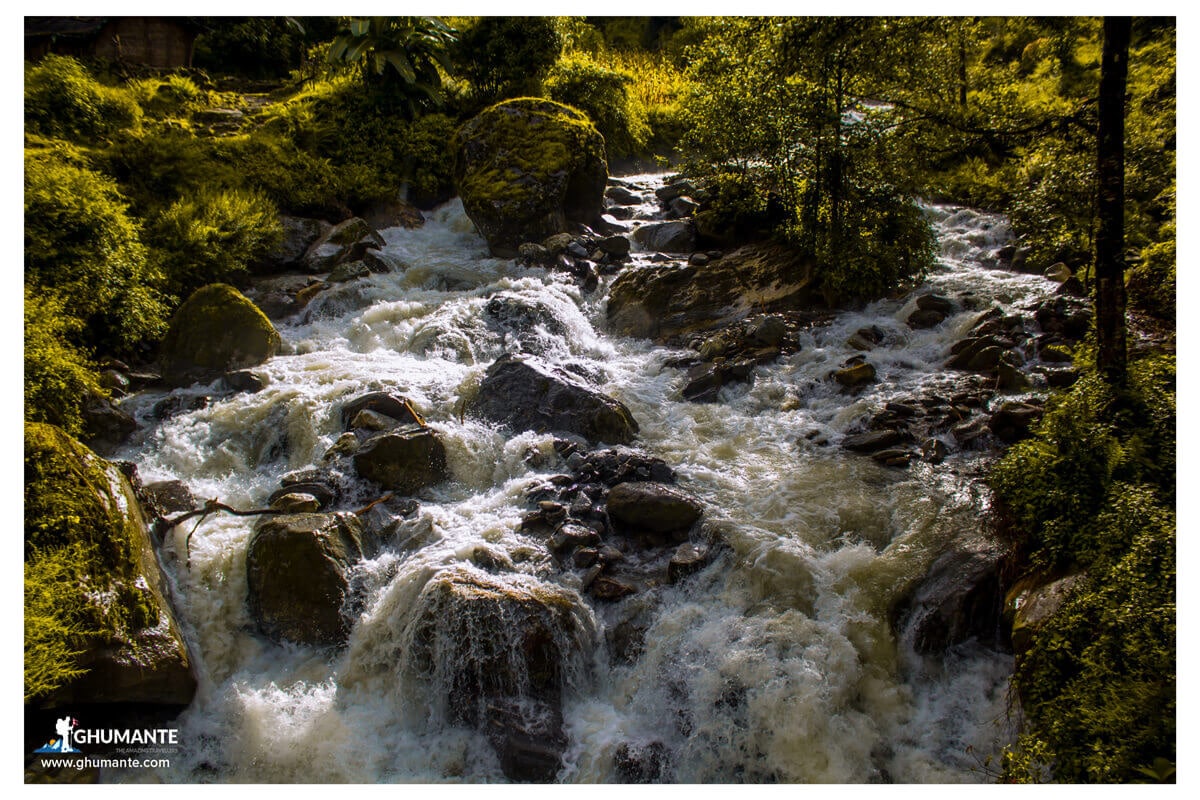 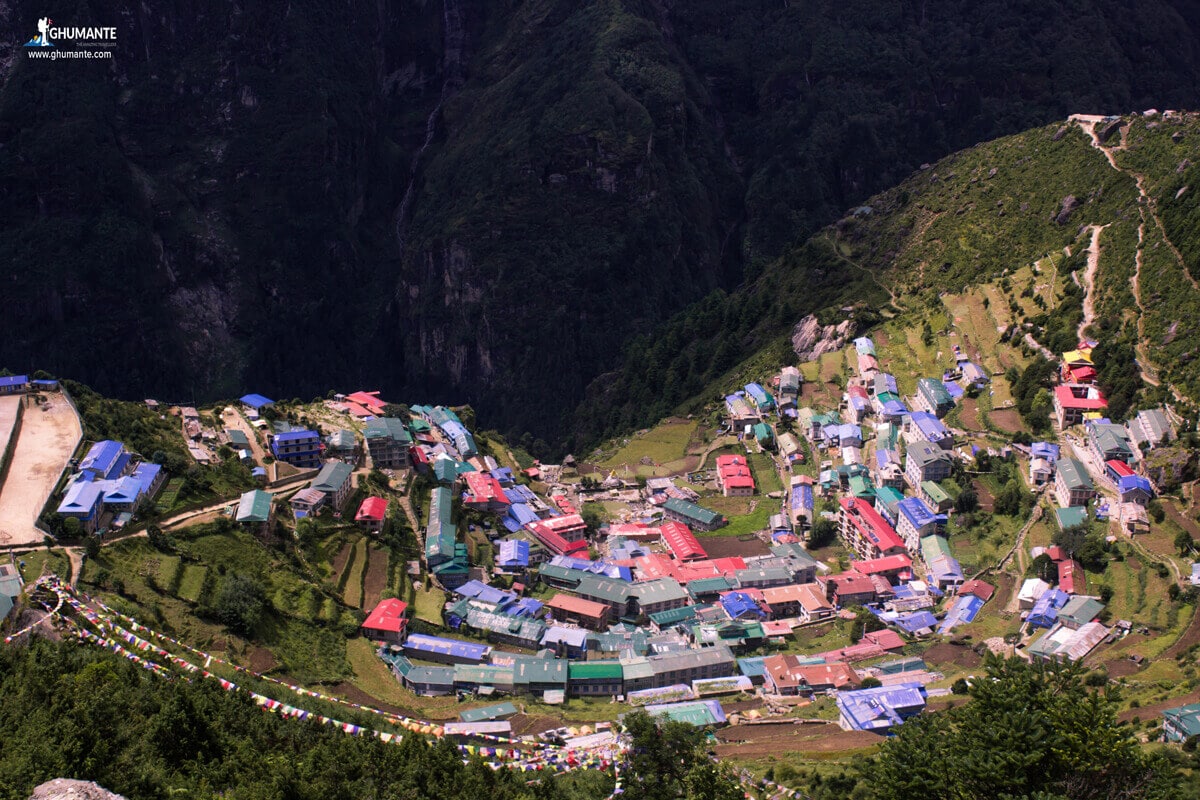 All these villages (mentioned above) have primary to secondary level schools and micro hydropower. WiFi is avaialable in every lodge and hotels, so you are always connected to the outside world. Visitors can recharge their cell phones and camera batteries at all places. But as you go higher, they charge you for all these facilities, still it’s nothing compared to the services you get at such a remote place. 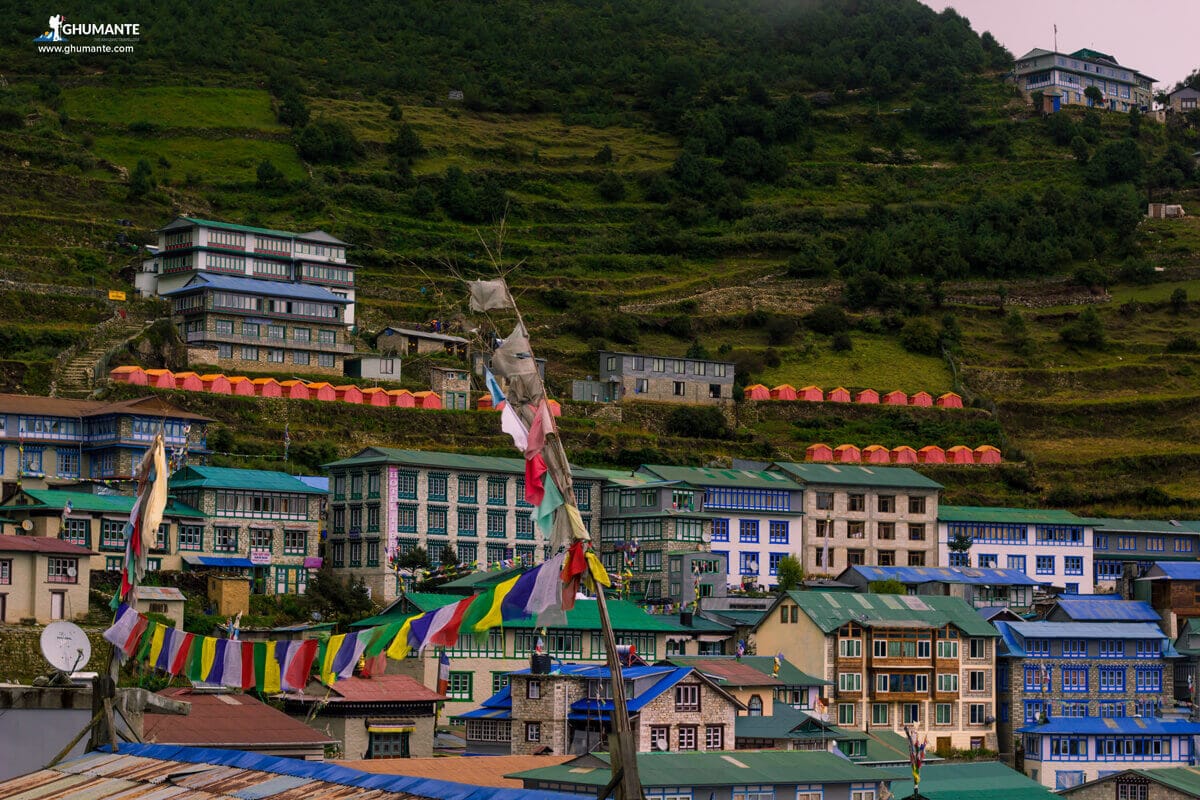 Hotels and tents in Namche Bazar

On the 5th day, we headed towards Namche Bazar. But night fell before we could reach Namche, with no signs of city in sight/distant. We knew we were on the right path but since there were only two of us, we started to get scared (baffled) as there weren’t any trek route signs.  Fortunately, our friends from Nepal Telecom, Namche Bazar, came down to receive us, it was already 18:00 hours and dark.  Exhausted by the walk, we retired to our hotel straight away. As all trekkers do, we stayed for two days in Namche Bazaar to acclimatize. We explored Sagarmatha National Park (SNP) Office, Sherpa Museum, and Local restaurants, pubs and bars and monasteries. This very place – Namche Bazaar – will never make you feel as if you are in any remote village. It has everything you need!  There is a view point in SNP office from where one can enjoy the panoramic view of Mt. Khumbi Yul Lha (5765 m),  Mt. Ama Dablam (6814 m), Mt. Pumo Ri (7165 m), Mt. Lhotse (8516 m),  Mt. Nuptse (7864 m) and Mt. Everest (8848 m). 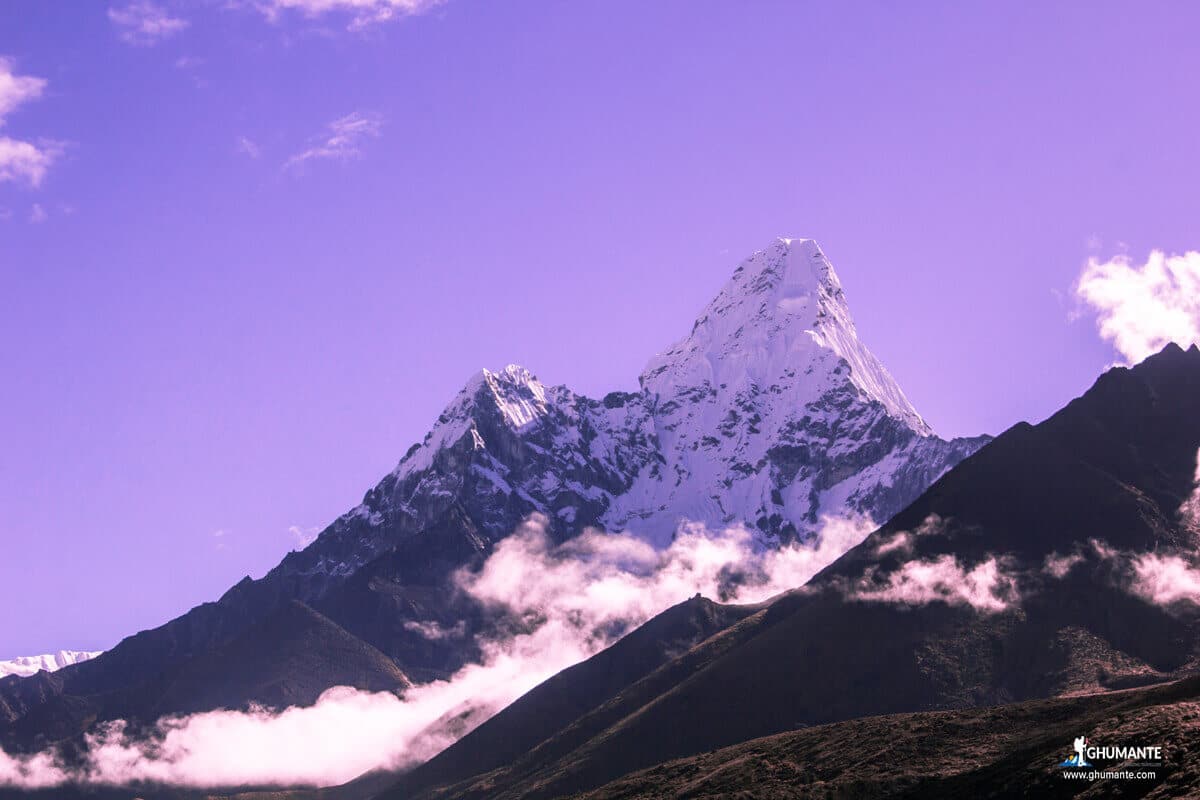 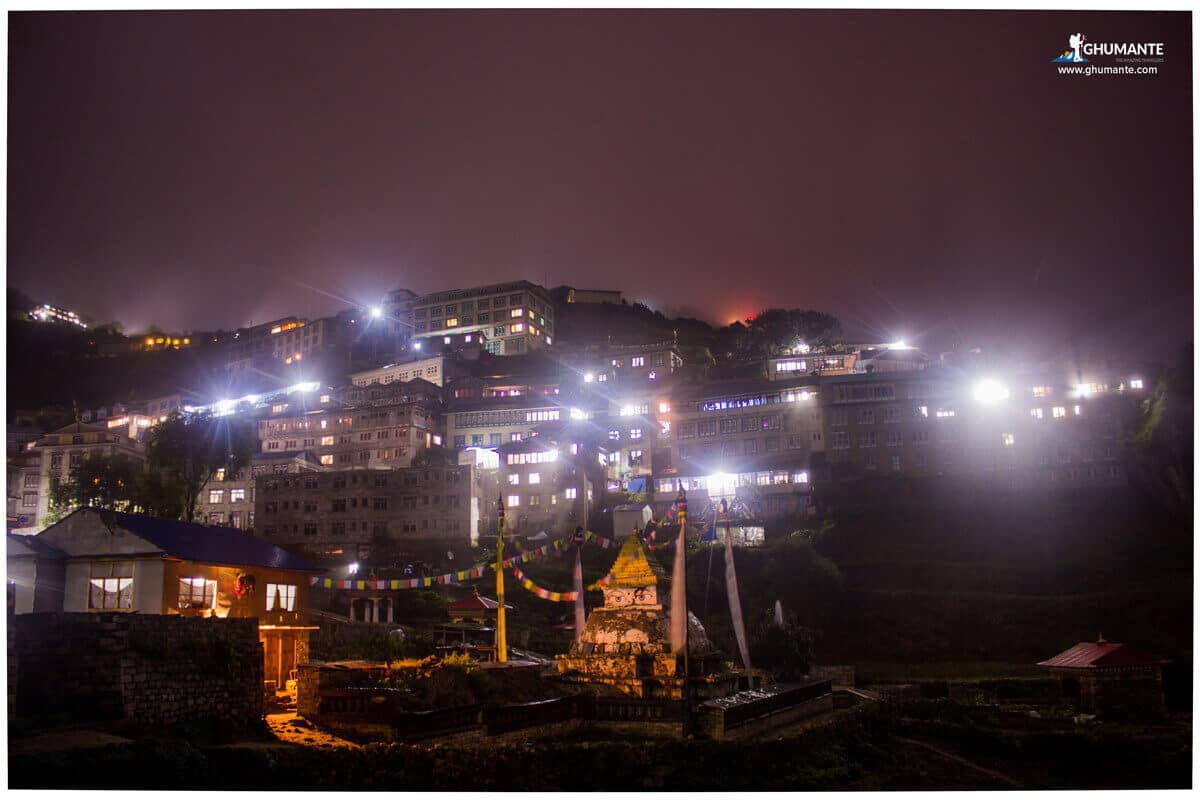 We played pool in the rock n roll ambience of Danphe Rock & Blues bar, hydrated and enjoyed our stay while our bodies got acclimatized. We began our trek (from Namche) further North after two-days of good rest. Though there was no rain, the mountains looked shy, hiding beneath the clouds while we hiked uphill towards Tengboche. Our stop for the night was Tengboche (3860 m) – famous for its Monastery built in 1916 by Lama Gulu. 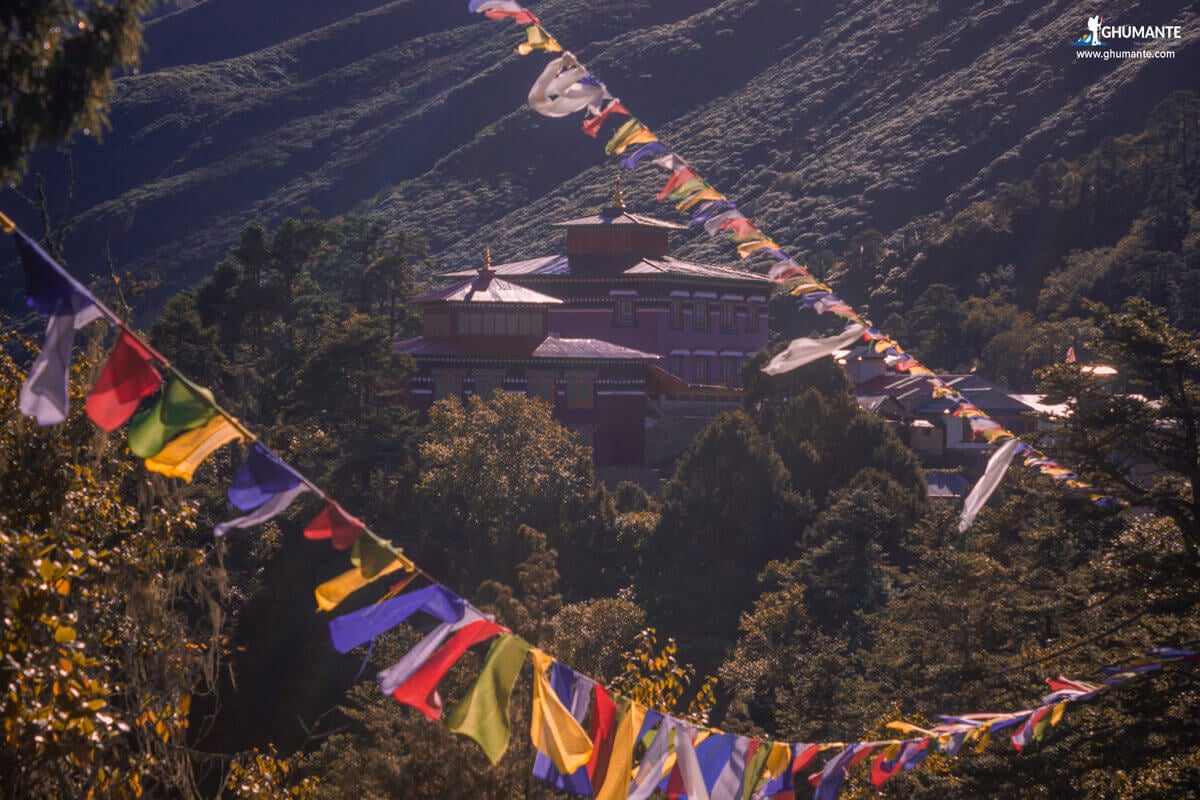 We walked through the Rhododendron forests of Tengboche, towards our next stop was Dingboche (4410 m) in Khumjung VDC. Until we reached Dingboche, everything was going fine. But then I started to notice the signs of altitude sickness with nausea, vomiting and mild headache. Romesh was worried and somehow skeptic about me going further up (so were all the other guests at The Yak Lodge where we stayed that night). Some of the guides suggested we go down and then come up again in a day or two. But as the saying goes: “If you think you can, you can!”, I decided no matter what I shall not retreat. I felt much better the next morning and we resumed our walk towards Imja Tsho. 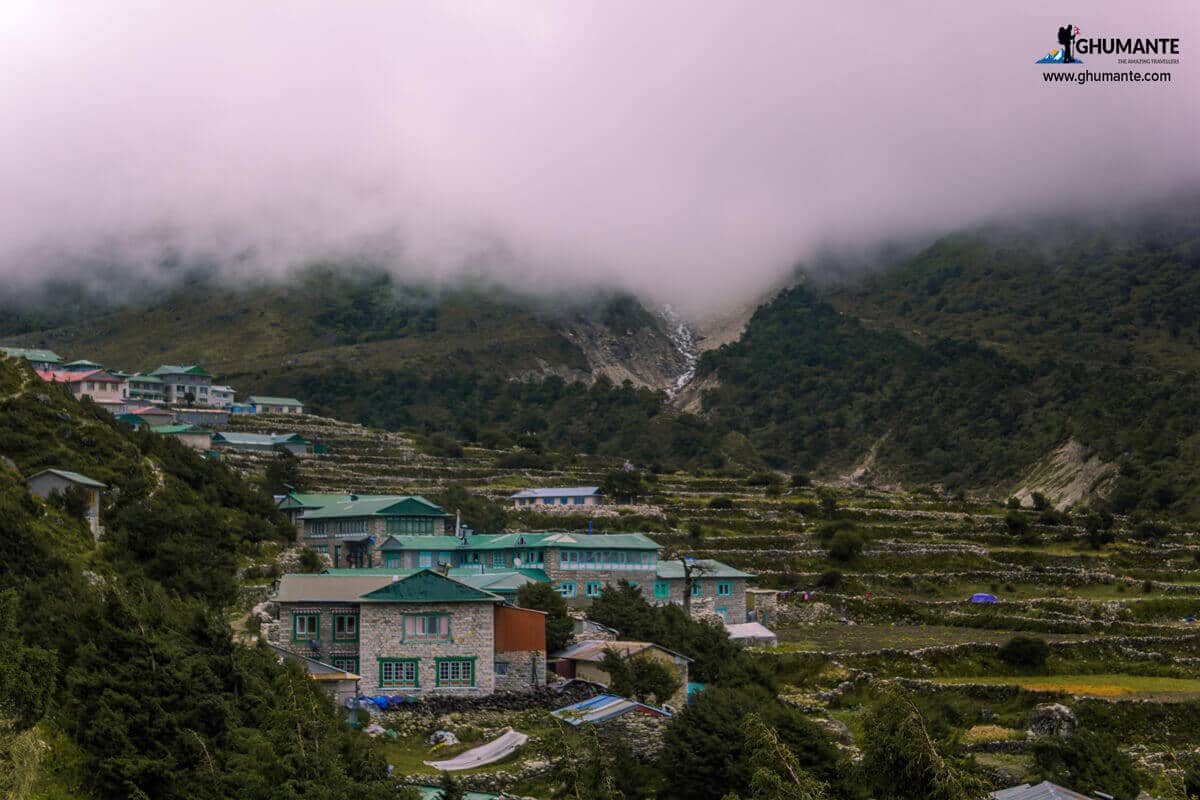 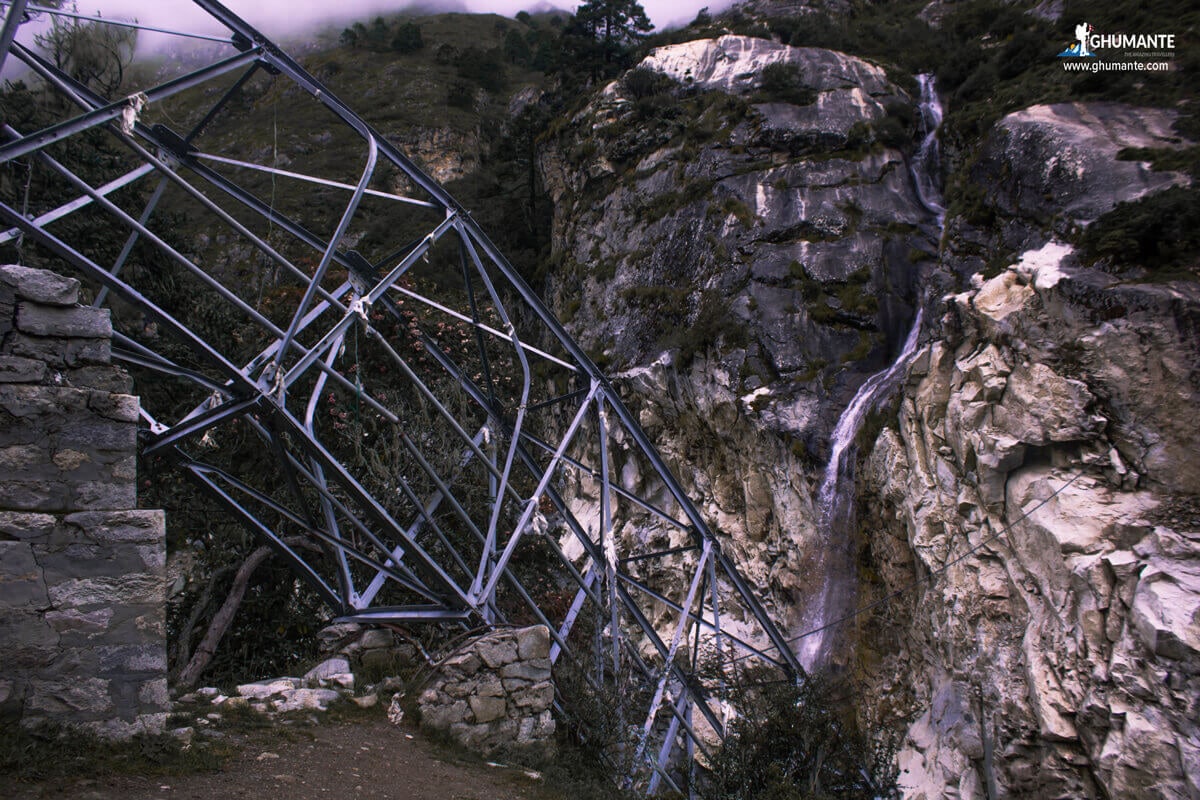 Recently fallen bridge because of landslide on the way to Pangboche

With magnificent view of Imja khola flowing below on our right-hand side, we reached Imja Tsho glacial lake through Chhukhung village (4730 m) in Khumjung VDC. Site engineers were working on the dam which is being built by Nepal Army to control the flow of excess water from glacial lakes formed by Imja glacier, Lhotse Shar glacier, and Amphulapcha glacier.  Imja Tsho glacial lake water level has risen at an alarming rate over the years. It is a project funded by the GEF and the UNDP, upon the initiation of Department of Hydrology and Meteorology (DHM). We met some people and staffs working on site for the project, took their interviews and got to know more about their work. 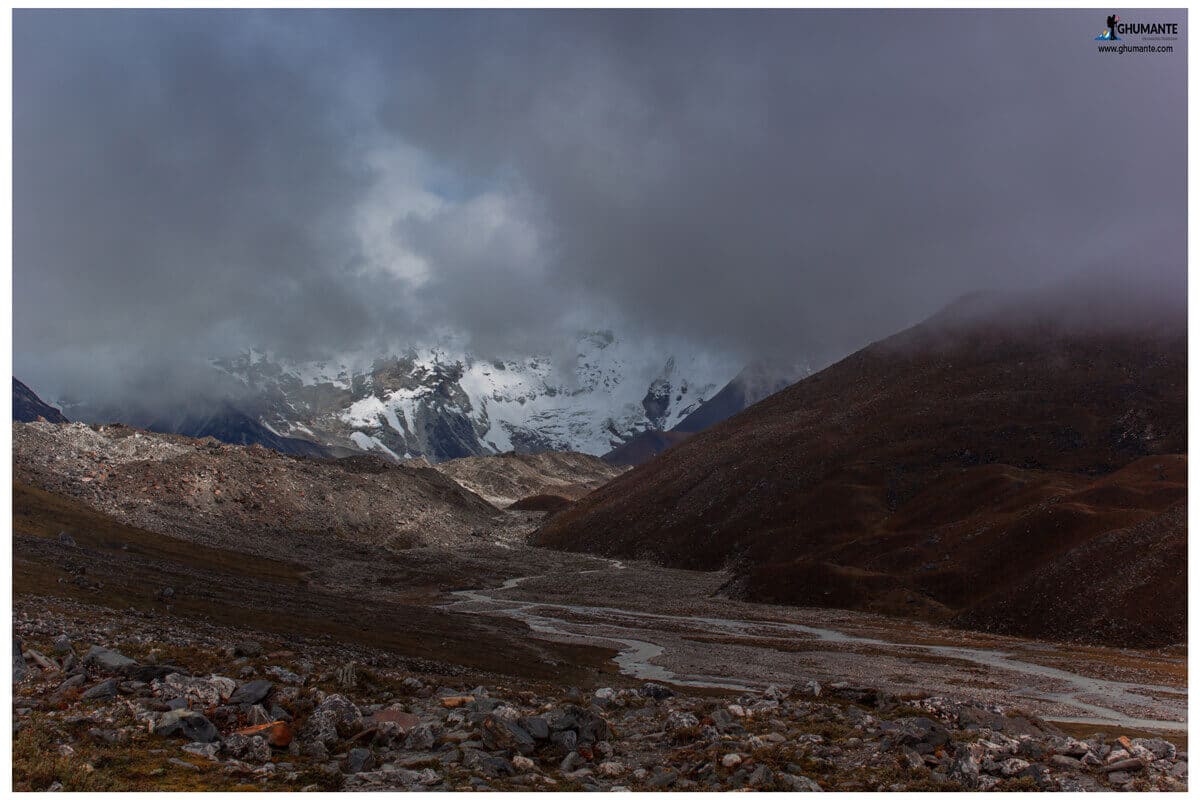 Imja Glacial Lake is one of the hundreds of lakes at high risk of Glacial Lake Outburst Flood (GLOF) in the Himalayas. In the worst case scenario, the entire Everest Trek Route could collapse.  And in the absence of trekkers, the people of Khumjung VDC, Namche VDC, and Chaurikharka VDC will certainly have no jobs. The lives of thousands of people in Everest region depend upon tourists in some way or the other. Thanks to all working on the project, now they have lowered the water level of Imja Tsho by 3 metres. 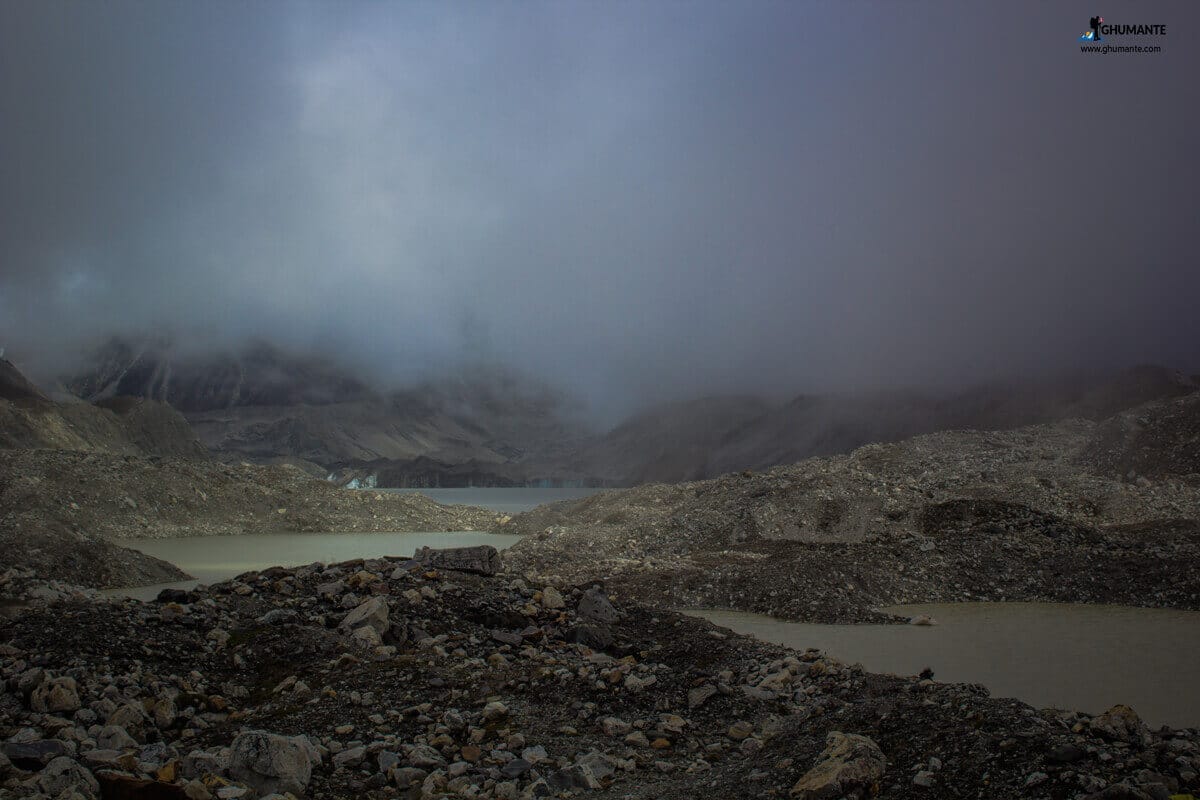 It was 4 pm in the afternoon by the time we were done talking to the project officers at Imja lake and  it was getting dark. So we decided to descend towards Dingboche. We reached Chhukhung at 6pm and decided to have dinner there as we were hungry. It was the only village on our journey back to Dingboche. Chhukhung lies mid-way between Dingboche and Imja Tsho. We met a mountaineer from New Zealand who was on his 16th visit to the region. What he said shattered all our hopes. Apparently,  the monsoon was delayed and it would take at least two weeks for the weather to clear up. We turned on our flashlights, and returned to Dingboche with heavy hearts. 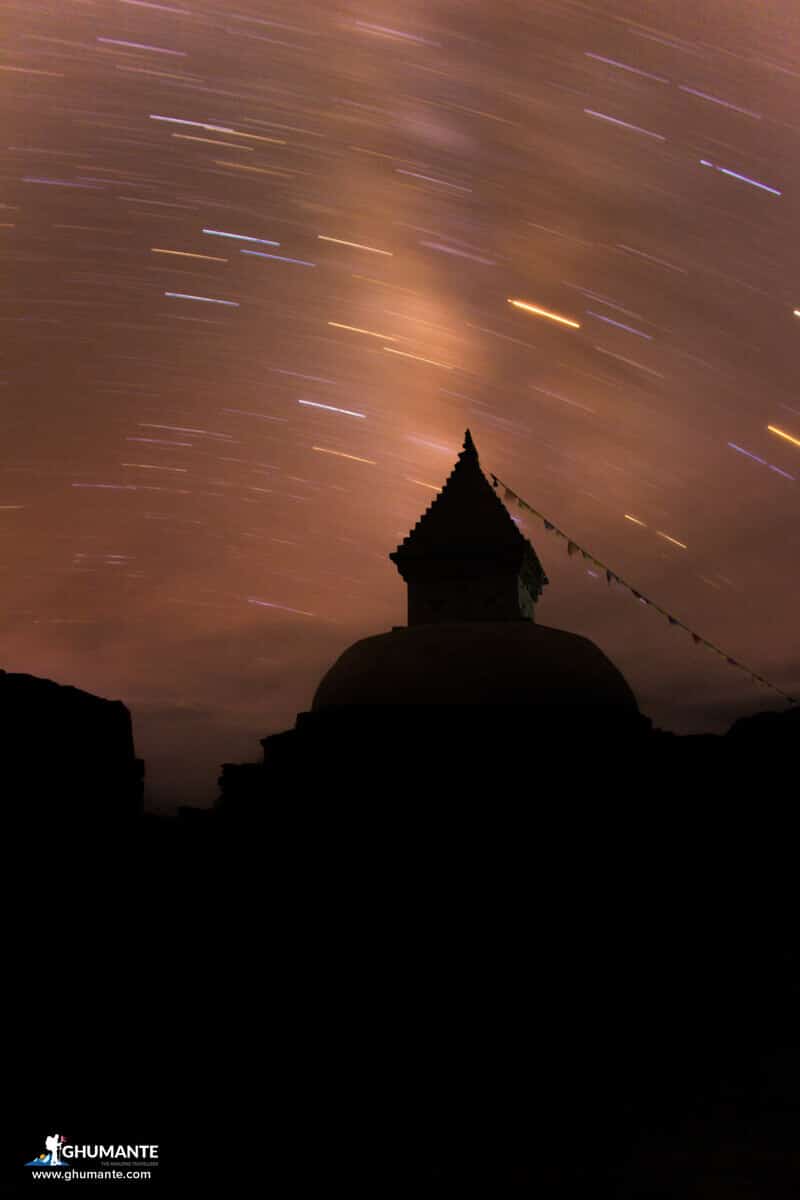 The two of us were lost before we could realize. We could see distant lights from hotels in Dingboche and decided to follow the same. But no matter how far we walked, the lights always seemed to move further away from us. To make the matters worse, all the lights went off suddenly. With no other options available, we continued walking oblivious of the direction we were walking in. After what seemed like eternity, we came across a water pipeline and decided to follow it with the hope that it would lead us to the village. Our intuition was right and we reached Dingboche village at 9 pm when everyone had already gone to bed. Later, we discovered the reason why the lights went off suddenly wasn’t a sudden power cut! While we were following the lights, it lead us to a lower elevation where the sight of the village was blocked by a hill. 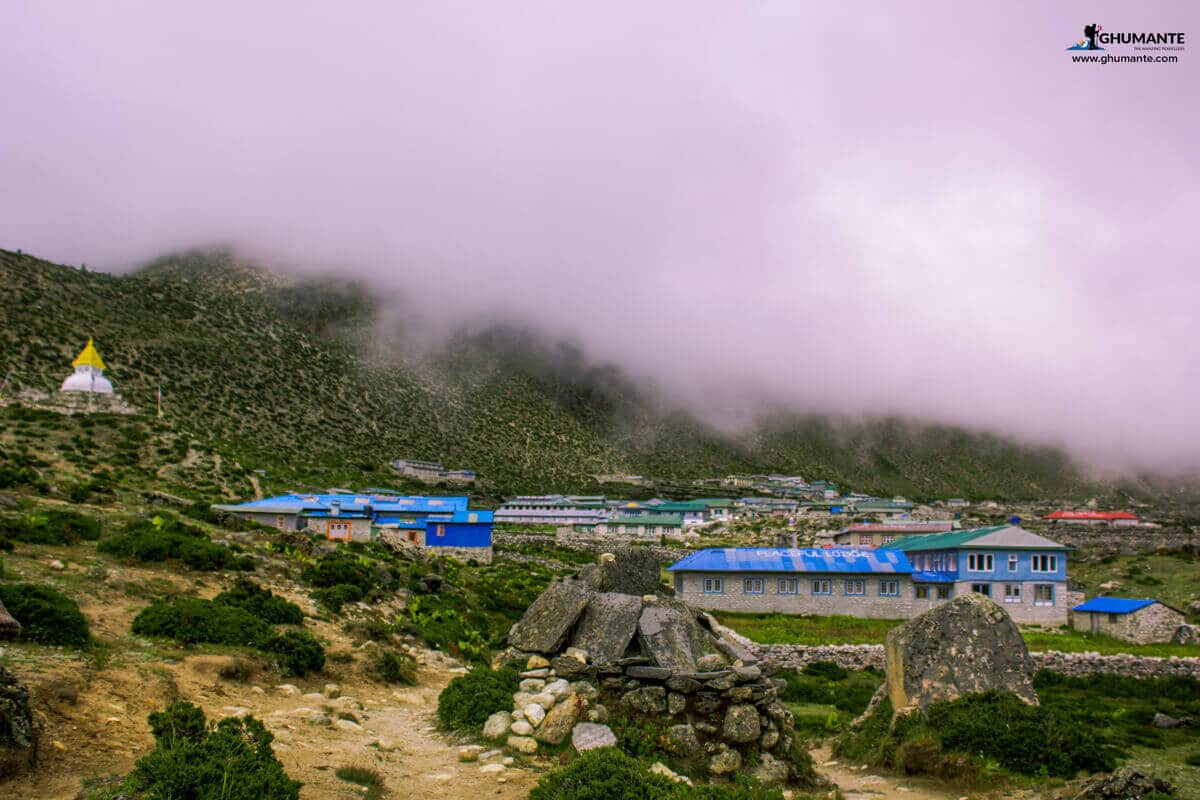 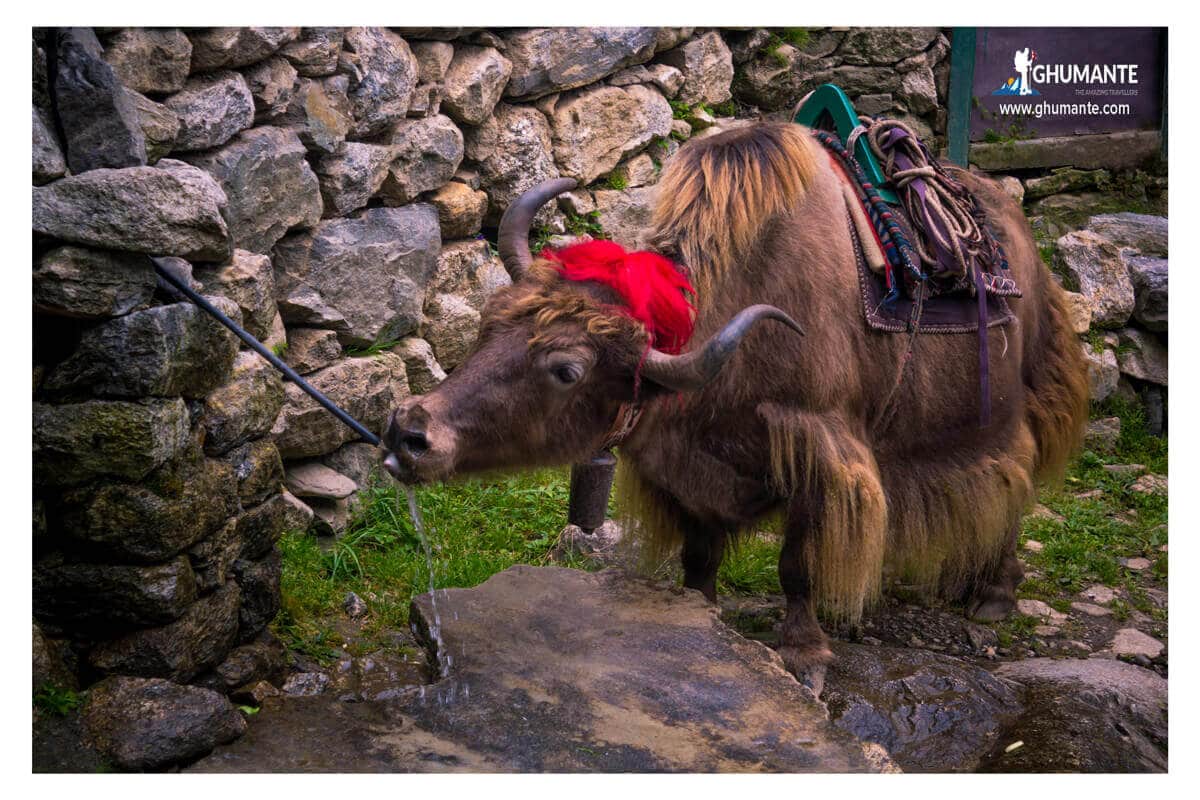 Though the trek was going well, we called off our plan to go to the Everest Base Camp (5360 m) for there was hardly any sign of mountains due to bad weather. We descended back to Tengboche and rested for the night in a lodge. The very next day, there she was glittering like gold under the first rays of the sun, the gorgeous beauty, Ama Dablam. We could see panoramic view of Mt. Thamserku, Mt. Ama Dablam, Mt. Nuptse, the mighty Mt. Everest, and many more. However, we didn’t have to regret our decision to call off mid-way as it started to rain mercilessly for continuous 18 hours before we could get to Namche. We were once again stuck in the rain for two straight days at Syangboche (just above Namche Bazar). Finally, we ended our journey by taking a helicopter from Syangboche Airport (the highest airport in the world – 3750 m) to Phaplu Airport and took a Tara Air flight from Phaplu to Kathmandu Airport on 22 Sep, 2016. 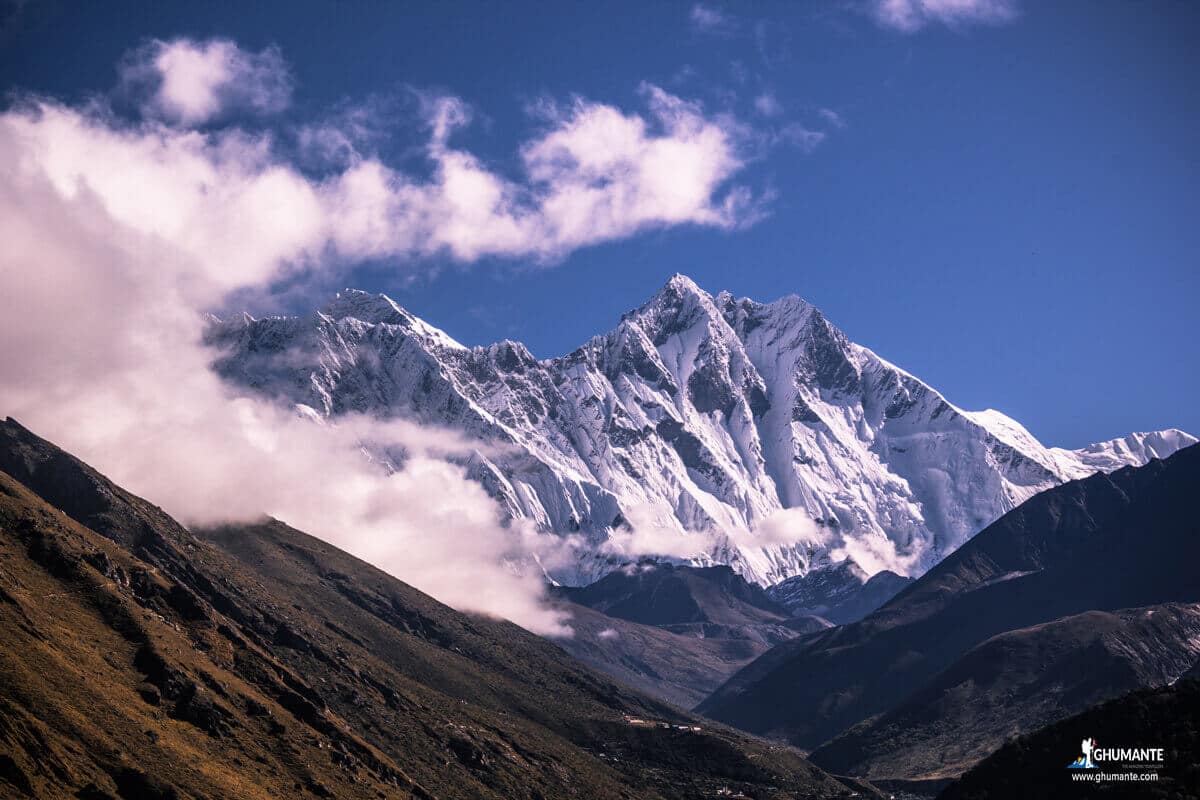 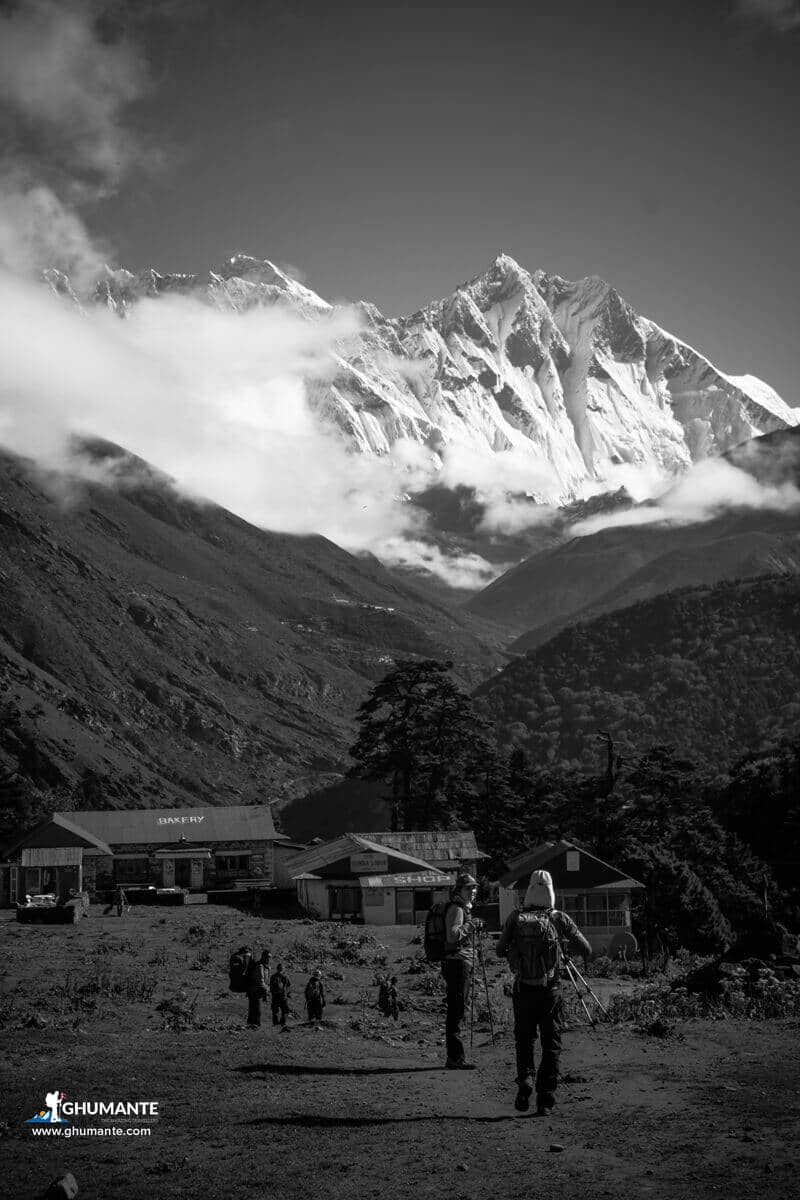 Trekkers on their way to Everest Base Camp

Though we had to cancel our Everest Trek midway, it was a journey full of adventures and taught me important lessons. If you are planning a trek, consider the weather forecast very carefully, seek out a friend or an expert’s advice, or research the perfect timing. Every season has its own significance. As a photographer, you have to keep your eyes open for things you can see only in that particular season.

Perhaps, I might have missed some wonderful views of the mountains and clear blue skies, I definitely grabbed the most from whatever mother nature put in front of me. “Be water my friend”, said Bruce Lee and I became the water. Witnessing the dangers of glacial floods due to Global warming to understanding the life of the locals, it was all worth it. 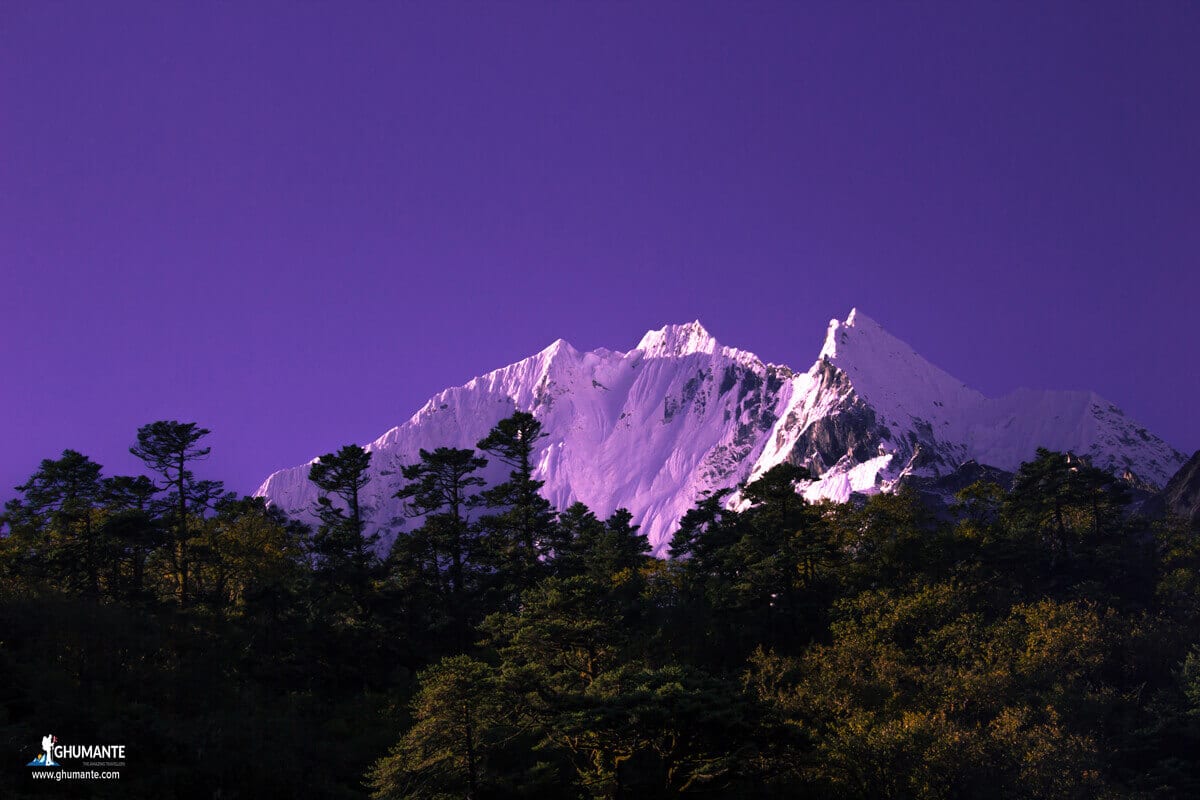 Previous postTrip to Kalinchowk, A Heaven on Earth
Next postMy Solo Annapurna Base Camp Escapade