Chitwan – Kathmandu – Pokhara Tour helps you to discover Kathmandu, Nepal’s capital, which is set in a valley surrounded by the Himalayan mountains. At the heart of the old city’s mazelike alleys is Durbar Square, which becomes frenetic during Indra Jatra, a religious festival featuring masked dances. Many of the city’s historic sites were damaged or destroyed by a 2015 earthquake. Durbar Square’s palace, Hanuman Dhoka, and Kasthamandap, a wooden Hindu temple, are being rebuilt.

Pokhara is a city on Phewa Lake, in central Nepal. It’s known as a gateway to the Annapurna Circuit, a popular trail in the Himalayas. Tal Barahi Temple, a 2-story pagoda, sits on an island in the lake. On the eastern shore, the Lakeside district has yoga centers and restaurants. In the city’s south, the International Mountain Museum has exhibits on the history of mountaineering and the people of the Himalayas.

Chitwan national park has long been one of the country’s treasures of natural wonders. The park is situated in south central Nepal, covering 932 sq. km. Chitwan valley consists of tropical and subtropical forests such as Sal forests, Riverine forests, and Grassland. Sal forests cover 70 percent of the park. Sal leaves are used locally for plates in festivals and religious offerings. The area was known as “Four Mile Forest” and was a hunting reserve for big game hunting until 1951. In 1963, the area south of the Rapti River was demarcated as a rhinoceros sanctuary. The area was gazetted as the country’s first national park in 1973. Recognizing its unique ecosystem of international significance, UNESCO declared Chitwan national park a world heritage site in 1984.

Chitwan – Kathmandu – Pokhara Tour helps you to discover the major UNESCO Heritage Sites in Kathmandu and experience the majestic Himalayan Ranges with mesmerizing sunrise at Pokhara. Explore the Diverse Flora and Fauna with Adventurous Jungle Safari at Chitwan.

Upon Arrival at Tribhuwan International Airport, You will be met and greeted with a traditional welcome by TravHill representatives and be transferred to your hotel in Kathmandu. You will tour Patan Durbar Square OR Swayambhunath (have to choose only 1 place). Transfer to Hotel. Overnight at Kathmandu.
2

Enjoy the sumptuous breakfast at Hotel. After breakfast, we will drive to the Domestic Airport, Kathmandu for a flight to Pokhara (25 min). Flight to Pokhara is astounding experience with picturesque of majestic Himalayan ranges all along its route. You can enjoy the ambiance of Pokhara in the natural settings with towering Himalayas in the back drop. Upon Arrival at Pokhara Airport, transfer to Hotel in Pokhara. In the afternoon, visit David’s Fall, Gupteshor Mahadev Cave and Shanti Stupa in the evening. Transfer to Hotel. Overnight at Pokhara.
3

Early in the morning transfer to Sarangkot- a hill station for mesmerizing sunrise and majestic Himalayan Ranges. Enjoy the opulent breakfast at Hotel. Drive to Chitwan [4-5 hours] in a Private Transport. Upon Arrival at Hotel in Chitwan, check in at Hotel, get refreshed & have a Lunch. Will go for a Village Sightseeing around Chitwan. We will end our half day tour with Sunset Tour at the bank of Narayani River. Transfer to Resort. Have Dinner (buffet). Enjoy the Tharu Cultural Dance at Resort. Overnight at Resort.
4

Have sumptuous breakfast at Hotel. Go for a Canoe Ride at the bank of River for an hour. After Canoe Ride, we will go for a Jungle Walk and Bird Watching with the specialist Jungle Guide at Chitwan National Park [30-45 min]. Visit Elephant Breeding Center. Transfer to Resort & have Lunch. Go for a Jeep Safari OR Elephant Ride inside National Park [2-3 hours]. Transfer to Resort. Have Dinner. Overnight at Resort
5

Flight back to Kathmandu

Have sumptuous breakfast at Hotel. Drop off to Chitwan-Bharatpur Airport to fly back to Kathmandu [30-35min]. Upon Arrival at Domestic Airport of Kathmandu, transfer to Hotel. In the evening, you may roam around Thamel area for shopping. Overnight at Kathmandu.
6 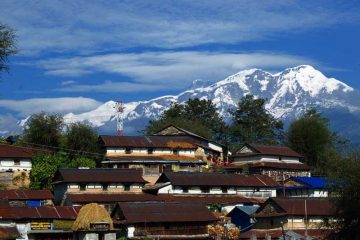 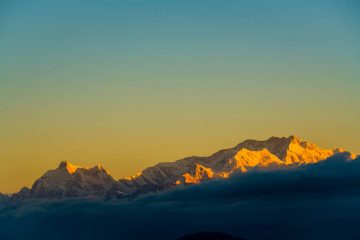 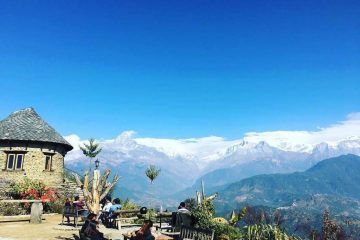 Annapurna base camp trek is one of
8Night/9Days
Annapurna Base Camp, Ghandruk, Kathmandu, Pokhara
$499.00
One tour per person