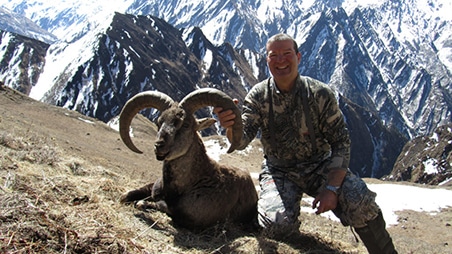 Infamous for and known by its mystic Himalayas, scenic valleys secluded forests and other different forms of precious nature, Nepal is an ideal destination for adventure tourism including adventure game sport trophy hunting. The area of hunting and the animals involved in the adventure are what make hunting in Nepal the ultimate experience for hunting enthusiasts. The best part of the hunting experiences in Nepal is that hunters are allowed to take their trophy back home.

Hunting still continues in some of the widely populous and famous forests in Nepal for blue sheep, tahr and other animals that the government sanctions approval for. The forests and hunting areas all over Nepal are an assortment of well-developed mixed-hardwood forest at lower elevation and many plant species of drier climate to the north. Tree species include fir, pine, birch, rhododendron, hemlock, oak, juniper and spruce. Nowadays, even helicopters are available to speed up the ascent to the high mountain hunting zone. But, for those adventurous people who want a physical challenge and to enjoy the serenity of the mountains more completely, operators still offer the trekking version of the hunt, which involves an intensive trek to the high country. No country besides Nepal matches up to the adrenaline thrill of hunting in the mountains.

Besides national parks and wildlife reserves, the Government of Nepal has also set aside a hunting reserve at Dhorpatan where controlled hunting of some species is allowed. The reserves for hunting are one of the prime habitats of blue sheep, a highly prized trophy animal, which is the main target of hunters. Other game species are ghoral, serow, Himalayan tahr, black bear, pheasant and partridge. Endangered species of the areas include the red panda and cheer pheasant.   Nepal boasts a hunting reserve where certain species of wild animals are allowed to be hunted. Dhorpatan Hunting Reserve, located not too far from capital Kathmandu, is a wildlife reserve on the footsteps of the Himalayan with specified hunting blocks. The main hunting species in the area are the Himalayan Blue sheep, Himalayan Tahr, Wild boar and the barking deer. If you are a licensed and passionate hunter looking to practice your hobbies freely, this is the best place to do it!